A “contactless, nontraditional” ceremony was held on Saturday to welcome the docking of Chinese research icebreaker Xuelong 2, or Snow Dragon 2, at the Lyttelton Port in Christchurch, New Zealand.

Xuelong 2, which carries members of the 37th Chinese Antarctic scientific expedition, arrived in Christchurch on Friday after a 17-day voyage.

“It is fantastic and we just exchanged gifts … in a COVID-19 environment. It’s very different from the way that we would normally do that when we have been able to go onboard ship,” Andrew Turner, deputy mayor of Christchurch, told Xinhua.

At the “contactless” welcome ceremony, a drone of the University of Canterbury (UC) delivered a Christchurch gift – a Maori element souvenir – to the deck of the ship, where about 100 crew of Xuelong 2 waved hands or small Chinese national flags to local officials standing on shore. 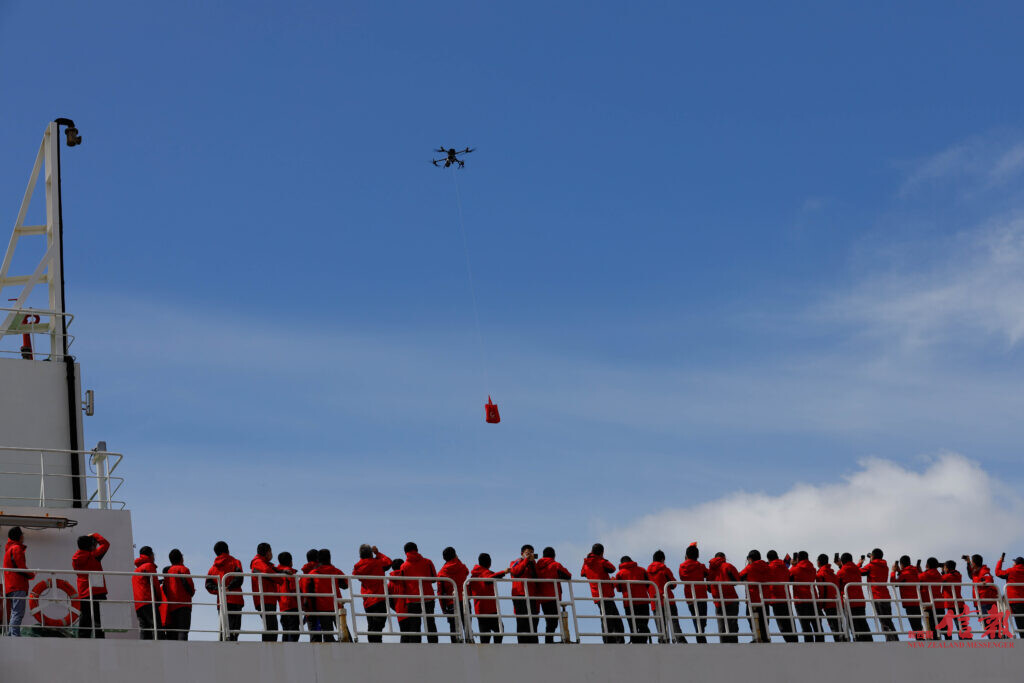 A drone delivers gifts to the crew of Chinese research icebreaker Xuelong 2, or Snow Dragon 2, at a “contactless” welcome ceremony at Lyttelton Port in Christchurch, New Zealand, Nov. 28, 2020. (Photo by Sun Xiaotong/Xinhua)

Since it departed on Nov. 10 from Shanghai, Xuelong 2 has sailed about 5,112 nautical miles. The ship is set to depart for China’s Zhongshan Station in Antarctica on Sunday.

During the docking period in Christchurch that lasts less than two days, the Chinese ship has been supplied in a “contactless” way in line with epidemic prevention and control guidelines. The crew were not allowed to leave the ship.

“Supplies were quarantined in advance before going onto the ship,” said David Kennedy, head of Christchurch Antarctic Office. Christchurch is one of the five Antarctic gateway cities in the world.

“Every nation working in Antarctica is making a big effort of keeping COVID off Antarctica because it is the only continent still yet to have COVID-19,” Kennedy said, adding a lot of protocols, strict regulations and isolation plans have been in place to prevent the epidemic, such as limiting the number of scientists and programs. At the ceremony, the UC drone also delivered some Christchurch Antarctic Network caps to the ship in its second trip, causing a warm applause from the ship deck. Before the ceremony, a video call was held among the ship crew, New Zealand officials for Antarctic affairs, and the Chinese Consul General in Christchurch.

“This is kind of social distance in international diplomacy. It is great to use high technology to be able to still have a formal welcome for the ship and the crew, and to have an exchange of gifts, a very nontraditional way, but in a way that we totally appreciate,” Turner said.

The Chinese Antarctic scientific expedition will carry out hydrological, meteorological and environmental investigations in the south pole and monitor new pollutants such as microplastics and drifting garbage in the Antarctic Ocean. 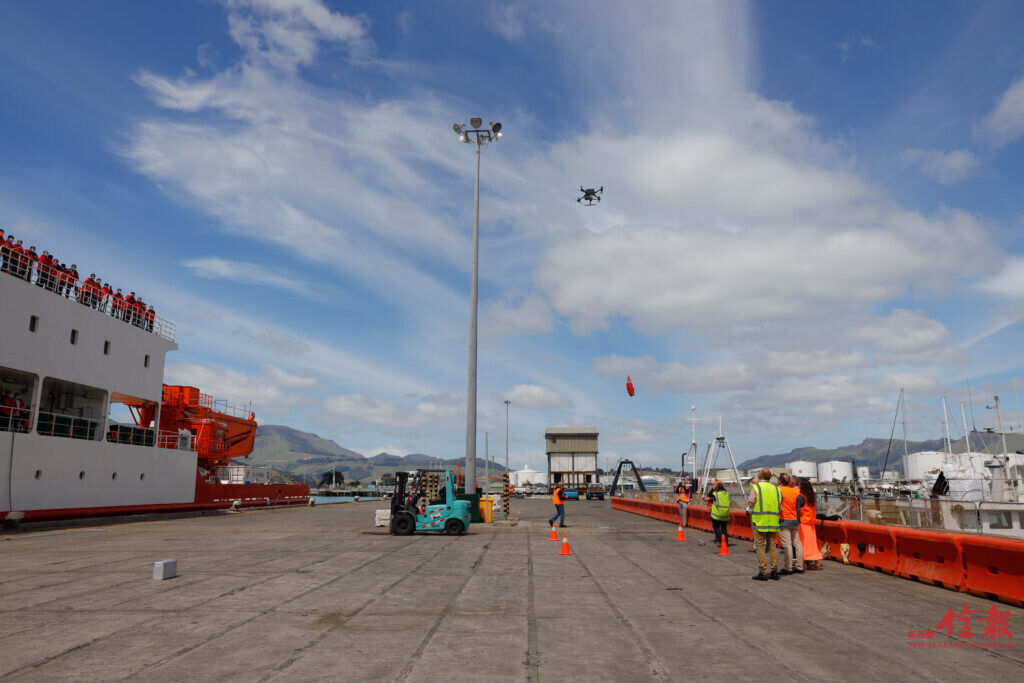 A drone is operated by New Zealand staff to deliver gifts to the crew of Chinese research icebreaker Xuelong 2, or Snow Dragon 2, at Lyttelton Port in Christchurch, New Zealand, Nov. 28, 2020. (Photo by Sun Xiaotong/Xinhua)

It will also carry supplies and rotational staff to China’s Zhongshan Station and Great Wall Station in the region.

This is the second time that Xuelong 2 has sailed for the Antarctic. The ship is planned to travel more than 30,000 nautical miles and return to Shanghai in May next year.

Since its delivery in July 2019, Xuelong 2 has completed one mission to the South Pole and the North Pole respectively. ■