HONG KONG, Oct. 3 (Xinhua) — Lavish pageants, cheerful dancers and crowds of photo-snapping tourists, all familiar sights at Hong Kong’s Disneyland, but a frequent visitor may notice something missing from the jamboree.

Long lines outside the theme park’s facilities were missing. So were many Mandarin-speaking visitors from the Chinese mainland.

It took Lin Fei less than five minutes to get a boat ride for “It’s a Small World,” a popular attraction for families with children. In the past, the line extended far outside the facility’s iconic clock tower, she said. 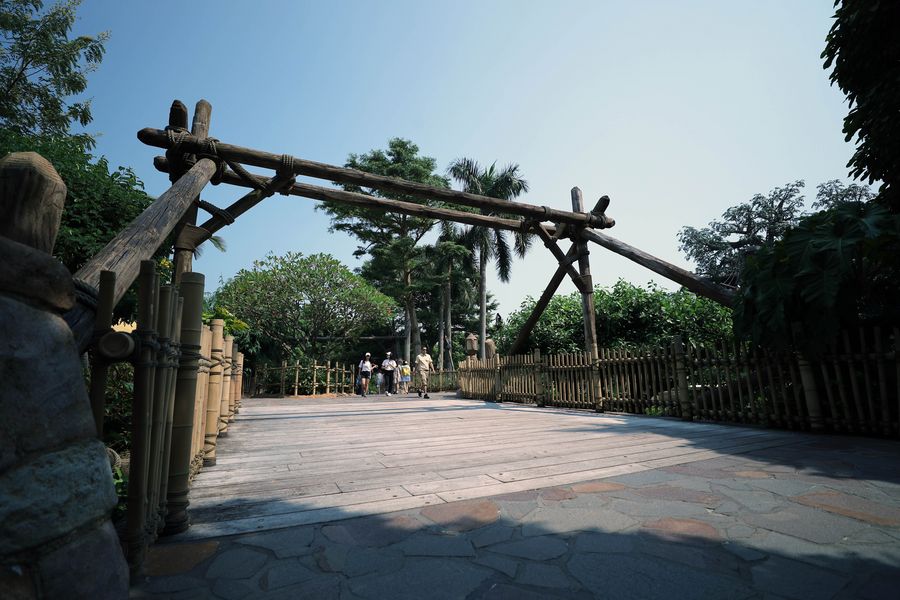 “We came here because we heard the park was less crammed than usual,” said Lin, who came with her father from Shenzhen, a neighboring city in the mainland’s Guangdong Province.

“But we had to be very cautious in Hong Kong because of the recent unrest,” she said.

The week-long National Day holiday on the mainland, often dubbed as the “Golden Week” holiday, is also a peak season for Hong Kong’s tourism sector. But this year, a prolonged unrest has led many tourists to shun the city for safety reasons, taking a toll on Hong Kong’s pillar sectors such as tourism and retailing. 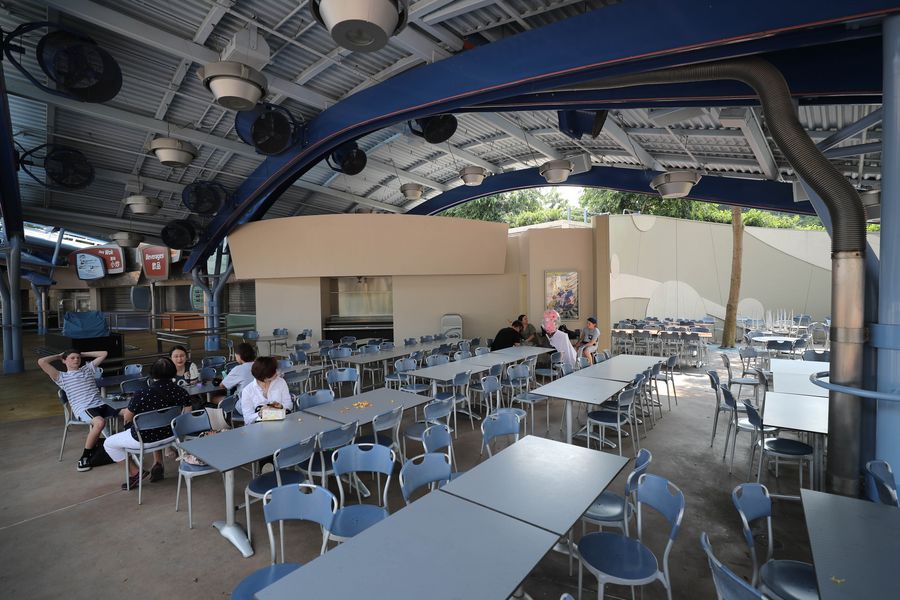 Hunan Overseas Travel, a leading travel agency in central China’s Hunan Province, recruited no one for its package to Hong Kong for the National Day holiday this year, compared with more than 460 last year.

“Most of our clients balked at Hong Kong tours due to safety concerns,” said Liao Yan, a manager of the company. “This has never happened before.” Instead, tourists booked packages to Macao and Zhuhai in Guangdong.

Hong Kong Disneyland Resort told Xinhua that it “had been affected by the recent developments in Hong Kong,” without revealing the tourist data.

Wong Ka-ngai, president of Hong Kong Tour Guides General Union, said the unrest has turned the peak tourist season into a “chilly winter” and local tourist guides were among the hardest hit. “Many of our union members were forced to take unpaid leave,” Wong said.

The prolonged unrest has also dealt a heavy below to Hong Kong’s retail sector.

This is the steepest year-on-year decline for a single month on record, said a government spokesperson, adding that the impact is even worse than that during the Asian financial crisis in 1998.

Compared with last August, the number of overnight visitors decreased by nearly half, leading to a sharp drop in the sales of retail goods, including jewelery, watches and clocks, and medicines and cosmetics, said Annie Yau Tse, chairwoman of Hong Kong Retail Management Association (HKRMA).

To Kwa Wan in Kowloon, a well-preserved community that used to be packed with visitors recently saw few tourist coaches. At about 1 p.m. in a restaurant which used to be bustling with tour groups, only a handful of customers are dining inside. The chocolate store next door, whose products used to be snapped up by mainland visitors as gifts, was also empty.

“Our business has been poor since June,” said a salesperson. “Sometimes when there were few customers, we were asked to take a leave, without pay.”

The owner of a pharmacy in the Man Lok Street, who declined to be named, said that fewer visitors came after a mainland journalist was assaulted by rioters in August.

“Our sales was just about 10 percent of that last year,” he said. Closing time of the store used to be 5 p.m. To save electricity cost, now he pulls down the shutter earlier.

Many retailers told Xinhua they did not expect the National Day holiday to reverse the trend.

At the West Kowloon high-speed railway station, long queues were not seen these days. In an accessory store inside the station, a shopping guide surnamed Cheung had been leaning against the counter for a long time.

“It’s been like this for days, and few customers came in,” she said, adding that monthly sales since August have fallen by half compared with a few months ago, not to mention the previous “Golden Week,” when the newly-commissioned high-speed rail link between the mainland and Hong Kong attracted over 78,000 travelers on Oct. 1, 2018. 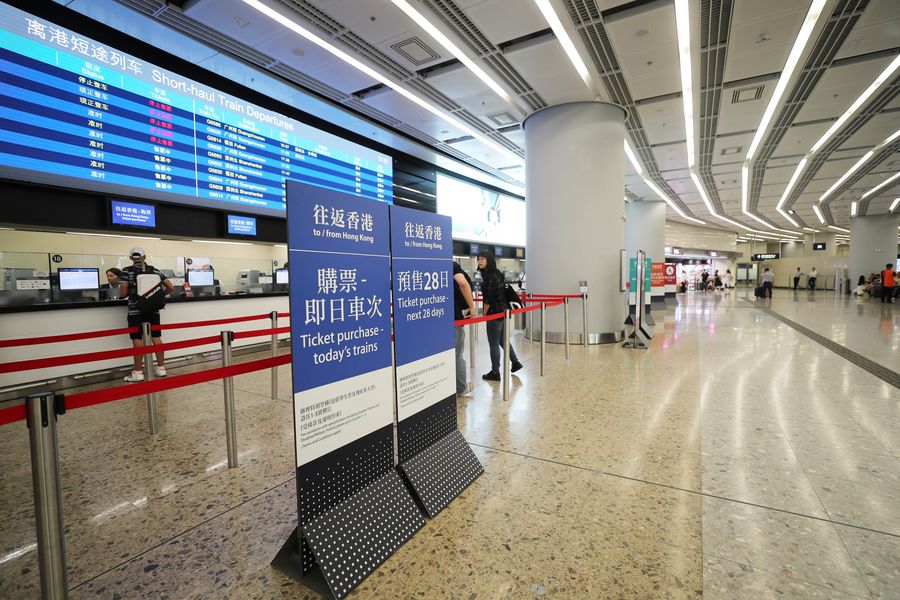 Statistics from the Immigration Department show that tourist arrivals at the West Kowloon high-speed railway station dropped by more than half on the National Day from a year earlier.

The bleak sales has made Cheung laden with anxiety. “If the situation continues, we could be fired. And it’s hard to find another job elsewhere as almost every industry in Hong Kong is suffering.” 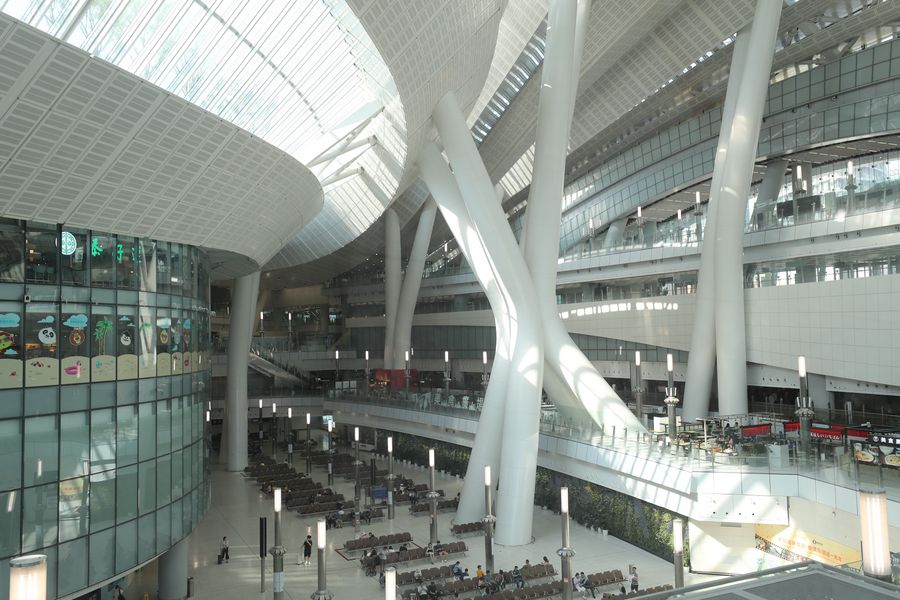 WISH HONG KONG BACK TO PEACE

In front of the ticketing machine at the station, a frequent visitor to Hong Kong surnamed Chen said he was surprised to find the tourist city turned empty during the peak season.

“I saw much fewer visitors in the shopping malls and streets. There were also many vacant seats on the high-speed train,” he said.

Chen, leaving Hong Kong on Wednesday, said his trip was not as satisfactory as expected because he only went to Kowloon this time. “I did not go to the Hong Kong Island as usual because I heard that assemblies were held there and violent incidents may occur.”

Tse said the fresh bout of violence had brought the most tremendous challenge in their life time for many retailers. Many of the HKRMA members were forced to close. Some managed to open, but their sales dropped to only 10 to 20 percent, she said. 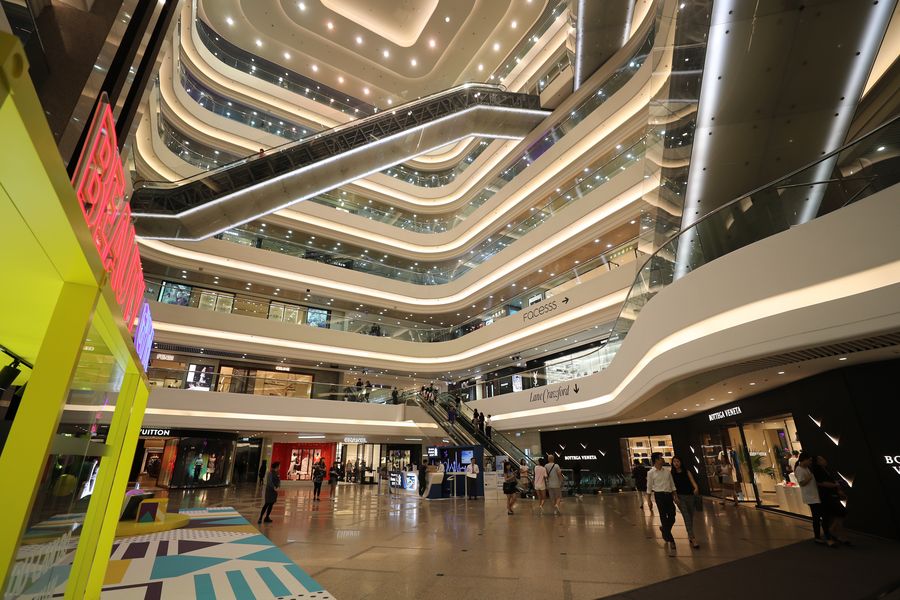 The Hong Kong General Chamber of Commerce said the radicals’ chilling disregard for rule of law is not only affecting Hong Kong’s reputation as an international financial and business center, but also crippling many small businesses and threatening the livelihoods of hundreds of thousands of ordinary citizens.

In a post on her social media account late Tuesday, Hong Kong resident Michelle Ma complained about her exhausting journey home from West Kowloon Station, with a photo of her husband and son dragging luggage in an empty street in the evening.

“Last year, also on this day, we arrived at West Kowloon Station, enjoyed the National Day fireworks display at Victoria Harbor and went home happily. Today, the fireworks display is canceled, nearby Kowloon metro station is closed, bus services stop and there is no available taxi…” she wrote.

After making a detour and transfer in the metro system, Ma and her family finally reached a station three stops away from their home on Hong Kong Island, but had to finish the last leg of journey on foot due to the station closure and bus service suspension.

“My greatest wish at the moment is for Hong Kong to return to peace soon,” she said. ■